I have hundreds (and I mean hundreds) of fast food toys. I love them. They remind me of when salt was just salt and not a death sentence. My treasure trove of 90’s fast food toys is dominated by Burger King. I was always a BK kid. I found Kid Vid and his radical pals to be far more cooler than that slap happy clown who was up to something sinister. Never trust a clown!

So I have a ton of neat toys from the golden age of BK. Everything from Pokemon to Bonkers crash cars. However, my collection has one monstrous hole in it. Actually, it far more than a hole. The series that I missed out on goes beyond owning any of the physical toys. I simply cannot remember these toys being advertised! That’s a damn shame since I am a big fan of the Universal Horror Monsters! 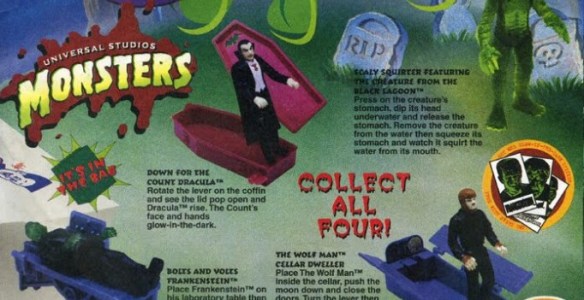 I have no idea how I missed out on this epic campaign. It could be do to the fact that I was actually fighting monsters instead of playing with them. Pshhh. Ya’ll have no idea what I have seen!

Watching the commercial reminds me of how kick ass fast food toys use to be. Now we get these dinky toys that aren’t even playable. The heck! CAN’T A GUY JUST ORDER A KIDS MEAL SO HE CAN FORGET ABOUT MODERN TIMES!