So my doctor told me I have high blood pressure. I guess it’s unusual for someone my age to have it. Stress related or something. I’m all good, though. That is until I saw the official Blair Witch sequel.

I tried standing up when the lights turned on. I guess I was rigid with fear because my knees almost gave out on me! I was totally exhausted. The Blair Witch totally kicked my ass.

I was expecting a good movie that milked the source. What we got instead was a Force Awakens type of experience. The original served as the foundation and the rest was completely building up more of the mythology. On top of that the filmmaking behind this gem was absolutely on point.

Director Adam Wingard utilized some fresh found footage techniques. Everything from drone footage to mini cameras. Beautiful work. The thing that I loved was the reason for having the footage displayed in such away makes complete sense.

The icing on the cake was the pure and utter terrifying suspense that was carefully dropped on us. It all blended so damn well I nearly died. Thank God I didn’t get a heartattack because I would have missed the the insane ending!
Blair Witch is undoubtedly going to become a huge franchise that will dominate the box office. I’m on board with what Lionsgate and company have up their sleeve. The Blair Witch is only the beginning of the nightmare! I can see this going to so many different places. Not just in story but in marketing as well. Just gimme it all!

One of my favorite things to do when I’m bored is to watch random horror trailers for movies that I have never seen. What’s even better is when I find a trailer to a horror flick that I have never heard of! The feeling of seeing something totally virgin is a damn treat. I’m not saying I’ve seen every single horror movie in the universe. What I’m saying is I’ve heard or come across a dungeon full of horror films so it makes it tough for me to be surprised.

But that’s all going to change starting tonight. The tiny red monster inside me scream for virgin horror cinema. And by golly I will appease its Kong sized appetite! My goal is to select a specific year in horror and pillage it until the red monster is satisfied. This is Graveyard Machine Mission! But every mission must have a game plan. Or maybe just a rough idea of game plan that could potentially be a game plan but out of pure laziness we will not actually have a game plan but a nugget of plan that could be grow into something that looks like a game plan.

Boring! I will do this rough and on the edge! I have selected by year in horror. Now, I could have picked any year. The world is my oyster but I felt like I should pick a year that is special to me. That year is the year the world was given the greatest gift of all time – me. The year is 1988.

The year of my birth is filled with some top shelf horror films. But it’s also bursting with absolutely ridiculous horror movies. So it’s with disgusting pleasure that I present to you the first trailer from Horror: 1988. I give to you the most disgusting horror trailer that I have ever seen. 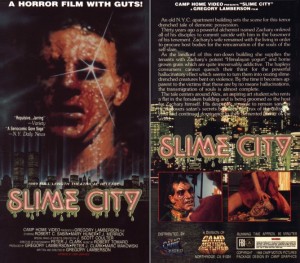 Watching the trailer for Slime City literally had me tasting the yellow pus and goop that seemed to dominate it. It also had me shaking my head and wondering why the heck didn’t I see this in high school! This type of film is awesome garbage. Nice hot, sticky garbage that you pass around to your friends. The movie is apparently about a couple moving into an apartment. The main face takes some sort of drink that turns him into a slimy murderer. YOU HAVE TO WATCH THIS TRAILER!

Tell me that wasn’t the most over the top, sanitize your eyeballs trailer you’ve ever seen?! The effects are simply amazing. The gruesomeness is on par with anything I have ever seen. That’s including any Fulci film. Bold statement but true.

Slim City is clearly pure exploitation slop. It’s these kinds of films that you want to watch with a group of friends on a Saturday night. Selecting films at random was sort of a risky decision. I could have wasted three minutes of my life. I’m glad I didn’t waste my precious minutes with this trailer.

SLIME CITY is a Graveyard Machine must watch.

Horror is one of the most remarkable genres in all of cinema. Not only has it has been around since the dawn of film, it has also created subcategories such as the Slasher, Creature Feature, and Found Footage Horror just to tickle a few of its many bones. And let’s face it, it’s hands down the most profitable genre for any filmmaker or studio. People love being scared; it’s a drug.

People have paid money to feel that rush for over 100 years. I can’t speak for others who watch horror movies, but I always turn one on when I’m depressed. The feeling of being scared by fictional images always slash away any feelings of depression or worrying thoughts. It’s a stress reducer; I know I’m safe from the horrors within the celluloid. Yet I still let it crawl under my skin until it clutches my heart. But this feeling we all love is a drug. And we want more of it! 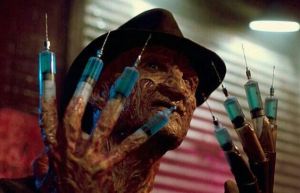 So how can we increase our dosage of fear? And how the hell does The Conjuring 2 play into our delicious habit? It’s simple – TC2 is the horror blockbuster we needed because it’s the blueprint to the future of the horror genre. When I was watching The Hodgson family go through their nightmare, I literally felt as if I was in the Enfield house with them. This was all because of Director James Wan and cinematographer Don Burgess’s damn fine job using the camera in unique and involving ways. Without spoilers, we spent a beautiful amount of time in the point-of-view of the family members; when the mother looked through the door, we were forced to look at what she saw (we all nearly died in fright ) As I mentioned in in my previous article the camera had us possessed. A particular scene involving one of the girls under her sheets had me convinced I saw the future of it all; almost instantly I turned to my fiance and said, “This is why Virtual Reality is perfect for horror.”

Virtual Reality is not science fiction. It’s real. I’ve tasted it. You can google virtual reality headsets and easily buy one for under $50! That means the technology is getting easier and easier to develop. We already have some virtual reality scenes/movies that transport you to a different place or time. The technology is at our fingertips. We can finally experience a main stream horror release in Virtual Reality.

Hold on, hold on! I understand that watching an entire movie this way would be distracting to the story. What I am proposing is to introduce key jump scenes, or dread scenes as I call them. For example, something pops out as we walk down a hallway or peek through a door. Imagine watching the end scene in The Conjuring 2 when everything is going to hell inside the house! That would literally scare the crap out of people. Imagine a VR re-release of The Exorcist (Regan’s room in VR?!) How about a VR re-release of Paranormal Activity!? The possibilities are endless! Sure the movie screen would have to be curved to a certain degree, sure a comfortable headset would have to be created, and sure that means the price would have to increase. Innovation means change and change means money. I don’t care. I think it’s worth extra coin to experience something like that, and I think most people would agree with me.

Going to the movies used to be an experience. Now that we’re in the 21st century, the experience needs to change. Why can’t it? Why shouldn’t it? Why not push the boundaries past the shadows of familiarity? TC2 showed us with fancy camera work, insane scares, and terrifying characters that the future of horror is ready for something more. We are hungry and ready to experience horror like we have never seen it before. The blueprint is all in The Conjuring 2. Let’s get our fix.

By the way – don’t tell me I’m delusional. Warner Bros has already released a taste of the VR future!